A callback: a joke that refers back to another joke performed

earlier in the show; often presented in a different context.

Snap Shirt: A shirt with snap on buttons. Very often coming in plaid.

My love for snap shirts has always been something of a thing in my life.  When I first moved to Wood Buffalo, it wasn’t long until people knew me for my insatiable and compulsory need to snap, Snap Shirts.

I’ve essentially been building this joke  in my community – this  callback – for the past 4 years.

In 2014, Chris and Jonathan Bowers quickly learned of my love for snap shirts. The three of us had been casted in Les Miserable at Keyano Theatre and we barely even knew each other. Correction. We actually didn’t know each other at all. Then one day Jon shows up in one of the earlier rehearsals and lo and behold, the man is donning a Snap Shirt.  Before I could control myself, my hands propelled themselves forward and in one motion *snap *snap *snap. Every single one snapped open. 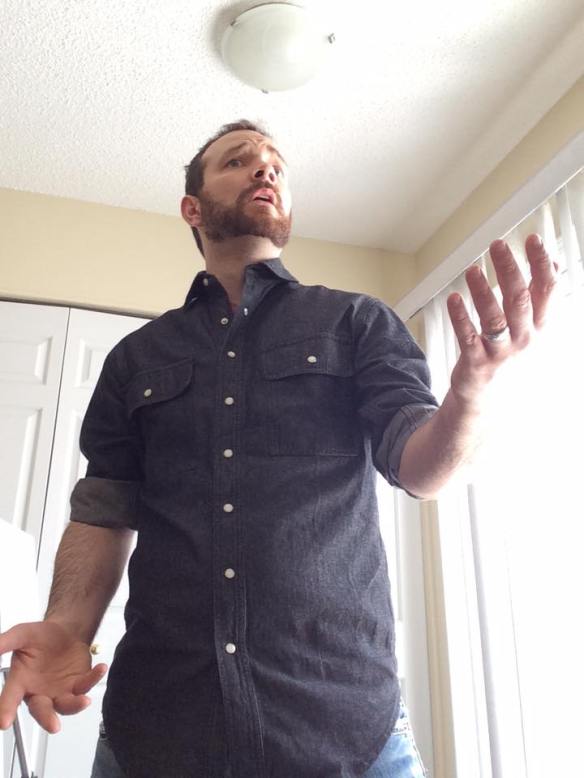 From then on, John and Chris would wear Snap Shirts for me. Not all the time… just as a treat. My goal for Snap Shirts is to always try unsnap all the snaps in one motion. To succeed in this, means you are a true snap shirt ninja.

One day, Chris and Jon came into rehearsals wearing their plaid shirts and chatting with each other in the hallway.

This was the unicorn of all snap shirts. The Ultimate Double Snap. To become a true Snap Shirt Master, I was to – unbeknownst to them – swoop in and get both shirts in one movement.

I grounded my feet. Took a low stance, not unlike that of a ferocious mountain lion getting ready to pounce it’s prey, and I began to run. I ran with the grace of a tiger , the speed of a leopard and the stealth of a wolverine. As I drew between them, their backs facing me, I aimed high and near the collar and with the skill of a marksman I ran my hands down from top to bottom. *snap *snap *snap *snap  *snap *snap. I maintained momentum and disappeared around the corner.

Simultaneously, I had succeeded in the Ultimate Double Snap.

It was the sound of plastic.

Ultimately, Chris had in fact, NOT been wearing a snap shirt.

I just ripped off all the buttons of his shirt.

My screams of glee and triumph instantly changed to a look of horror and shame.

Chris was so mad.

I sheepishly returned to him, picking up each shameful button one by one, and told him I’d sew them back on for him immediately.

Since then, it has been an ongoing joke in the community and friends now wear Snap Shirts just for my own personal pleasure!

I have not since reattempted the Ultimate Double Snap. The opportunity has never come up since. It truly is the unicorn of Snap Shirts.

And so, its been nearly 3 years since that incident and Chris and I are obviously still friends, and he still wears his Snap Shirts for me. In fact he’s wearing one in our debut of stage production of #Surething. Just for me :).

Lastly, I wanted to share with you all this. For my 31st birthday, I asked for one thing from my friends. A #snapshirt #selfie.

Because whatever Melba wants. Melba gets.

Check out Chris’s Blog at CJBuzz.com