January 11, 2016 Blue Fin became my first “real” 12a Red Point (I’ve often climbed routes that have been downgraded from 12a to 11d, so this was a big step to become a part of the 12a club.)  Red Pointing is when you’ve been working on a climbing route (sometimes multiple attempts) and eventually climbing it is while you lead the rope from the bottom to the top of a climb without taking a fall or a break on the rope.

This is the year my planets have finally aligned to allow me to pursue my goal of sending 12a’s consistently. I started The Road to 12a – Part 1 a couple years ago and it’s been a slow journey.

Like any sport or skill there’s always benchmarks and plateaus that we reach as individuals. Whether it be playing the guitar or beating your best personal time in running or cycling. We all have at least one phase in our specialty that hits us in the face and says “you shall not pass.”

When it comes to climbing I haven’t quite reached that plate yet, but mainly because I haven’t been able to climb consistently over the past 4 years. I started actively climbing almost 7 years ago in 2010 and for the first two years I climbed nearly 200 climbs each year. Then the last four years, due to life, work, money, and excuses… I’ve probably climbed maybe 30 each year. It’s been hard, mentally and physically to always be starting from the ground up each time I went out.

2014 however, started with a bang and I  put in probably about 40 days, though not as impressive as the first two years, it’s a step up. Starting out in Potrero Chico in December of 2015 also was a tremendous boost to my mental game.

Personally I don’t count myself as a 12a climber until I’ve Red Pointed at least three 12a’s, and even then I probably wouldn’t tell people I’m a 12a climber for fear of being undeserving. 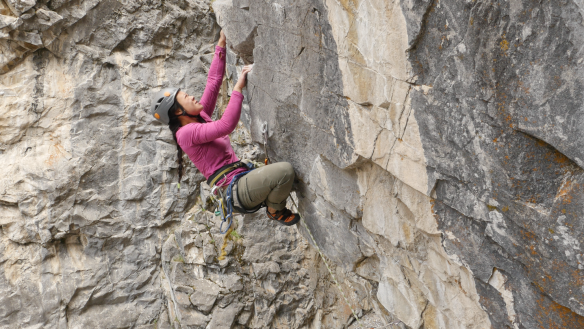 June 13, 2016. Humming Bird Arete was the second one under my belt. It took about 5 attempts, the first one being the previous summer and the last ones within last spring. I’ve always found that as long as I can do each of the moves, I will be able to Red Point it. Thus far. People often say I have a good mental stamina. I think this only applies to climbing for me though!

Adam and I had been alternating attempts and though we were able to do all the moves in the problem, it was just mustering the will to push through.  Our friend and outdoor videographer Calixte LeBlanc, was with us that day filming, which provided me even more of an incentive to get the Red Point.

I was feeling good and if I could just hit the moves just right it should go no problem.

I normally take maybe 2-3 burns on a project before I’m totally deflated and I was working up to the last go before closing up my hands for the day.

I remember thinking “if it goes – it goes, if not it’ll go next time.”  I tied in, velcroed up and took a deep breath.

For me, there’s always a point in a climb when I can feel my heart race because I know it’s going well, so well that it takes everything to remind yourself to take a breath and not get too excited.  It’s often at that point where you piece the crux moves seamlessly or when your feet cut loose but you somehow manage to hang on or when your hands start to lose strength and slowly open, but somehow you push through the burn and keep moving.

On Hummingbird Arete the moment was at the top out. The last few moves pulling up and over with slopey holds for hands and foot holds that seem to disappear. I always seem to hold my breath for fear of jinxing myself right before clip the anchors, which at that point I never fail to give a “Whoo!”. Yes I’m a Whoo Girl.

The Next Step is now that I’m finally in Calgary full time, with an annual gym pass at The Hanger, I can train.  No more off the couch climbing trips. From here on in there’s no excuses for not being to reach my goals. I hold myself completely responsible for whatever outcome I may achieve this season.

I’ve been climbing 30 – 60 min at the gym, 3 times a week. Diving once a week and trying to increase flexibility in my shoulders and improve my core 3x a week. I’m going to try increase my cardio to 1-2 runs a week and maybe… just maybe… eat less Sausage Egg Mcmuffins… maybe.

Well now that this is posted, I’m going to have to keep myself accountable. See you on the sharp end.