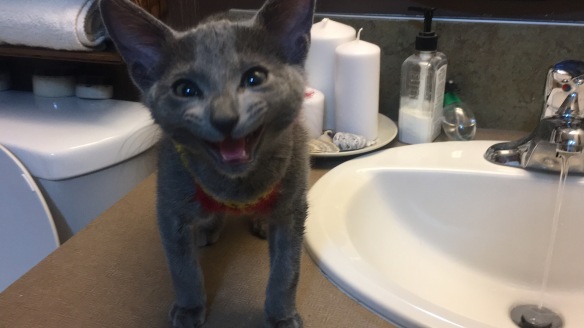 Training Dragon to be an adventure cat has been super rewarding so far. A lot of it is due to his breed of Russian Blues and the being loved and cared for by his breeder.

Now it’s up to me to continue his training and teach him to be the ultimate adventure cat.
Since Adam and I lead active lives climbing, paddling, skiing, snowboarding and all other random things, we require our cat to be held up to the same standard.

Alas, Rome was not built in a day and the foundation must first be poured before all else. That brings us to toilet training.

Right from the beginning, we wanted Dragon to be toilet trained. Since we knew we would receive Dragon as a 9-10 week old kitten we figured we should start immediately.  Our home would already be new to him and he would not have anything else to compare his experience with.

We had ordered a CitiKitty toilet trainer and so far it’s been pretty good. The initial House Training was easy because it just consisted of Dragon getting used to locating the litter on the toilet.

The CitiKitty consists of a plastic tray that sits on top of the rim of the toilet and held in place by the seat. It has several concentric grooved circles that are intended to be cut from the centre as the cat progresses.

An insert that is essentially the same thing as the tray with the circles is included. This is so you can always go back a stage if the kitty is having problems adjusting. (The hole in the main tray will always be a little bigger than the hole in the insert.) The insert and main train are flexible so the kitty can transition slowly from standing in the litter to using the firm toilet seat.

I have since progressed to the next ring and now the hole is obviously noticeable. Whereas before Dragon didn’t really think much of it. Now he walks around the hole going clockwise… Then counterclockwise and then looks up at me as if I’ve introduced a monster into his life.

The past few days I have been very vigilant, keeping my eye on him to see if he decides to unload elsewhere in the house. Several times he’s entered the litter and scratched around only to abandon the thought of trying to go.

It had been two days of not passing any bowel or urine, and me constantly placing him the litter every couple hours and getting him to smell and scratch the litter. I was getting worried that he was either going to have an accident somewhere or we would have to back track a stage.

Then on his own while I was crocheting one of his sweaters I hear him scratching around the litter. I quietly get up and check on him. He’s doing it! His first poop in the large hole!

Dragon was able to step up and conquer his fear of the unknown hole. Now it should be pretty easy going from here as he moves onto the next stages in the next couple weeks!