Whoever said you can’t teach an old dog new tricks obviously never heard of the adage “if at first you don’t succeed try and try again.”

Well Dragon has taught me that success reveals itself at odd hours of the day. 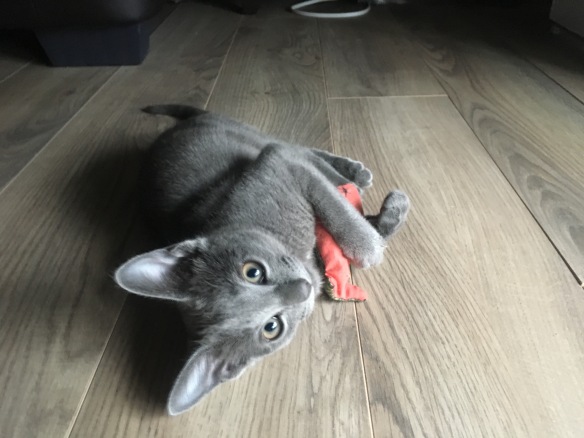 The world is full of “I can’t” or “its not possible.” Well if my kitten can do things that traditionally cats cannot, then perhaps we as humans can reevaluate our own potential.

I’ve had Dragon for pretty much three weeks now and my goal is to train him to be the ultimate adventure cat. In training him thus, I hope to inspire people that anything is possible. 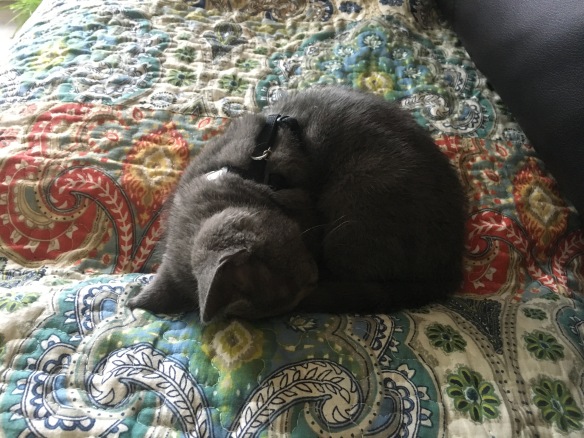 Sometimes I’ll sleep on the couch so I can spend the night with Dragon. Even though Dragon is hypoallergenic, we’ve decided to keep him out of the bedrooms for now for Adams sake.

It’s 6:04 in the morning. I feel Dragon rolling around next to my arm and I just figure he’s trying to eat his tail. He accidentally scratches my arm and I reach to find he’s playing with his damn toy catnip fish that I made him. 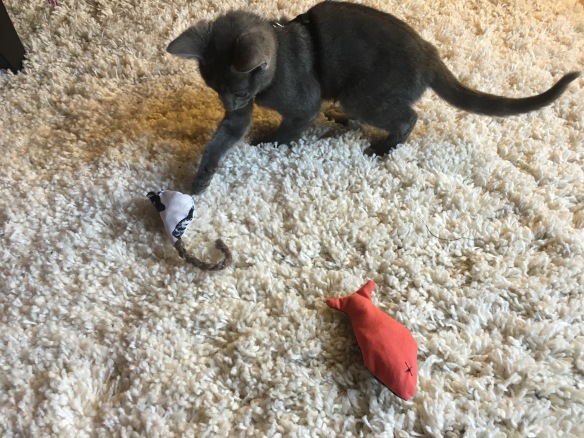 I take the fish and throw it across the room. He leaps off the couch and runs to play with it. I’m not surprised. The last couple weeks he’s been found to spontaneously leap at his stuffed cat nip toys. 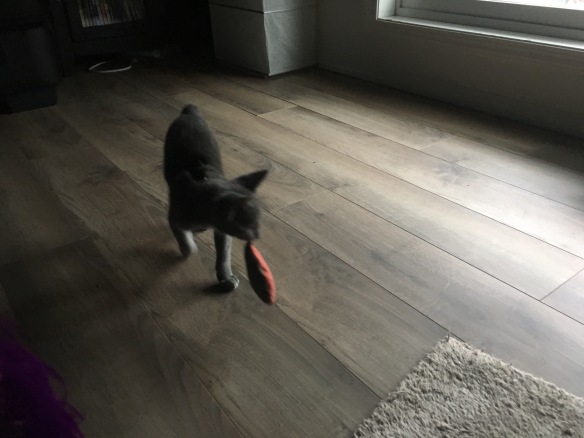 A few moments later he jumps back onto the couch and settles in next to my arm. I figure Dragon’s had enough so he’s coming back to bed.

He starts rolling around again and I realize he brought the fish back.

HE BROUGHT THE FISH BACK!

I suddenly realize the awesomeness of the situation and throw the fish again. By now I’m no longer asleep and I wanted to see if I had simply imagined the whole thing.

He brings the fish back again.

I hesitate to turn on the lights for fear this was a Unicorn moment and if I do so all is lost. I do it anyways because I need to see this with my own eyes.

The lights are on, I sit back on the couch and grab his fish.

He jumps on it and frolicked with the fish for several seconds. And walks away from the fish. 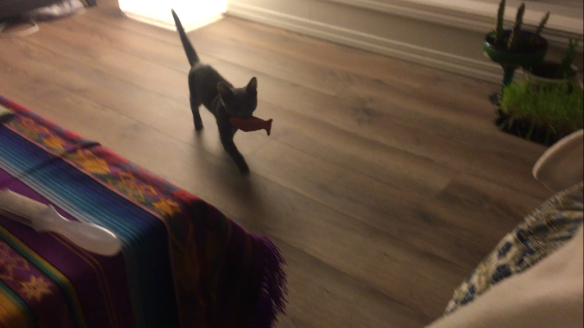 It was all a lie. A chance occurrence. My cat can’t fetch.

I pick up the fish and try again. I wave it in his face and tell him to get his fish. I throw it.

He brings it back! I praise and pet him like a crazy person .

I did it! I taught Dragon how to play fetch! To see the video check out my Facebook page MelbasToast.com

Now HOW did I teach him?

Since I was successful I feel like I can give some tips.

1. Figure out what his favorite toy is, ideally one you have seen him carry in his mouth.

2. When you see him play with the toy, pet and praise him.

3. Take the toy and throw it a short distance. Couple meters.

4. When he goes for the toy see where he brings it. Sit in that spot and repeat the process.

5. Pet and praise him every time he has the toy in his mouth.

I did this every couple days usually he brought the toy back to a particular spot. After a few times Dragon would be interested in something else. The key is to not give up because who knows maybe one early morning your cat will wake you up wanting to play fetch! Be patient!

Good luck and let me know how it goes!