If you’re someone who loves hot drinks, teas and everything that is associated with tea culture, this travel mug review will come in handy.  I have always been a lover of tea and tea related things; so much so, that I have a section of my home dedicated for all my tea things.

One of the reasons I became fascinated with pottery, was so that I could make my own tea vessels, and beyond that, I even spend time in the bush gathering and preparing herbs to make my own teas.

Needless to say having the ideal travel mug to keep your drinks at the temperature you want them is essential to this way of life.

The video for this review was a fun and spontaneous way to involve two very beautiful women to bump my views as well as provide outside feedback on my mugs. My friends Rosina and Diana had made plans with me to go on a walk and spend some time together. I was in charge of picking us up some hot drinks. On my way out, a packaged had arrived for me from my brother (for my upcoming birthday *hint*). Obviously i had to open it before I left, so with my boots and jacket still on I tore open the box and lo and behold, it was a new travel mug. The David’s Tea Curve.

Instantly I debated.. I have 30 minutes to meet my friends and get drinks. Should I…? Do I have time?…. YES there’s always time and always say YES. So off the boots came and the jacket. I scurried over to the kettle and started boiling my water. And thus the filming began. Today. I’m going to do a review on mugs, and I have at my disposal two amazing women – with sexy brains – to help me.

In the limited amount of prep time I had, I did my best to maintain as many controls as possible.

There are obviously many variables here but I’ll just list the ones that pop out in my head .

My goal is not to have everything perfect and down the science of why one travel mug functions better, but rather to give viewers an initial impression on what three people think of three different mugs. The purpose of this was to enjoy an afternoon with my friends, try out my new birthday mug and get some views from people other than myself of a product that is widely used.  In saying this… here are some factors.

Some things I thought about in terms of getting a better result in terms of effectiveness of a travel mug in retaining heat would be:

Let’s get down to business. Besides having an awesome time with my friends Diana and Rosina, they gave me really great feedback on my travel mugs. They even mentioned things I never appreciated or noticed myself about my mugs.  We have three travel mugs that will be reviewed:

Diana was the lucky bearer of this travel mug and her thoughts were this:

From the photos I’m sure you can tell I’ve had this travel mug for a long time. Somewhere in the 4-5 year range.  It’s my most used mug, I even have multiples. That being said, I feel like as an all around mug in terms of functionality, heat retention, and visual appeal, it is 4 out of 5. I find however that usually within an hour the liquid goes from piping hot to hot. and after an hour it quickly goes to hot-warm. Once again this depends on how often you open and exposed the contents. As guaranteed by the company I can vouch that it IS leak proof, up to currently 4 years ish. For the most part its easy to wash. This is an older model but the newer ones apparently come apart for easy cleaning. It fits in my Subaru Forest cut holder. (That’s something that my friends made a good point to consider when purchasing a travel mug. I wish it had an infuser in it because sometimes I put loose tea in it and thought it’s easy to clean out I get bits of leaves in my mouth when I do that.  I definitely would recommend it. For the effectiveness, price, ergonomics, functionality I believe this is the best thing on the market at this time. 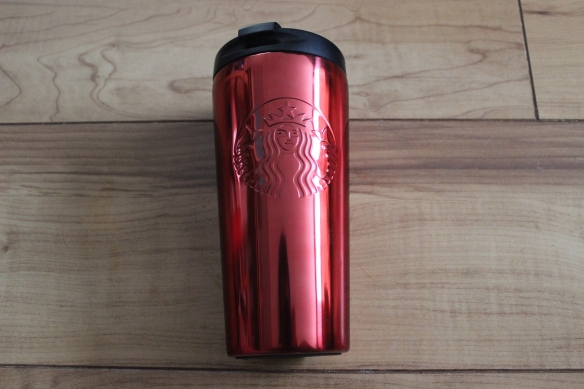 Rosina enjoyed her green tea in this particular mug and her thoughts as follows:

This mug was gifted to me by my sister, quite recently, so in terms of wear I’ve had it for about 1 month and used it maybe a handful of times. I have used and owned Starbucks tumblers in the past, but this is the only one I have now. It may say something about durability and functionality if I don’t tend to keep these around.  First glance, like Rosina, I was distracted by the visual appeal! “Oooooh, pretty!” When I started to use the mug, I was impressed at first by the tight snap on lid, but quickly annoyed at how difficult it was to open, often requiring the use of two hands or else there was a high probability of spilling hot liquid if you try and use one. (This conclusion was surmised based on personal experience.) I found that the liquid didn’t stay hot for long, whenever I did use it. My mother has a few of these mugs and I found with the aggressive angles around the lid and mouthpiece, gunk and coffee and tea often get trapped. It’s difficult to clean and they soon look pretty gross due to the build up.  For the price and compared to what other options I have, I would never buy one of these.

To be honest, when I first laid eyes on this mug a few weeks ago from a photo my brother sent me I thought it was awesome!  He sent me a picture of the Charcoal Grey Curve with the text “do you want this?” And like any grown human offered anything I said “YES!” That and I believe in the power of saying “YES.”

As chance would have it the David’s Tea Curve Mug arrived today just as I was heading out to meet my friends.  My brother suggested I review it and since my brother is awesome, I thought this to be a wise endeavour.

First glance, I really like the hourglass shape. What immediately comes to mind is that it’s going to be a comfortable grip. During my walk, I was able to confirm this and found it very comfortable to hold and though the surface is smooth it never slipped. 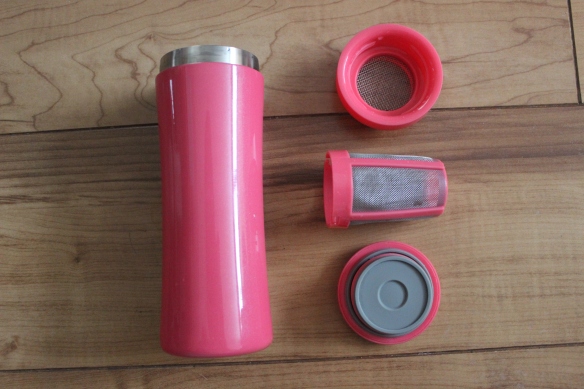 I love that it has a built in infuser for loose tea! The infuser actually detaches as well so you can remove it if it’s getting to strong. Since there’s also a strainer you really could just stick loose tea right in the vessel without using the infuser. 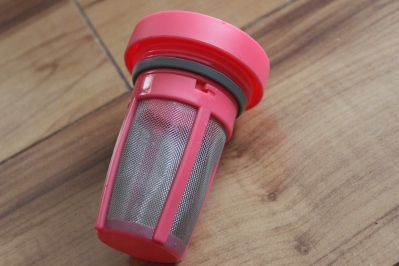 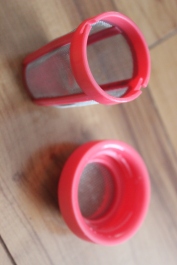 This mug really functions similarly to a thermos. It really keeps things extremely hot for a long time and you have to unscrew the lid like that of a thermos. This was a little bothersome during the walk because I was trying to film in one hand and trying to drink from the other, but I couldn’t because it takes two hands to open this thing.

It doesn’t have a mouth piece to control the liquid, so you have to be a little caution when sipping. However due to the top strainer being in place, it seems to act as a flow controller. I think perhaps I’m still treating it as an open rim so as time goes maybe I will develop are confidence in the design.

One really cool thing I didn’t know until I came home to write the review and research, was that within the lid there’s a secret compartment to store loose tea! AMAZING. In conclusion, I really love that the David’s Tea Crave travel mug has an infuser, it keeps things freaking hot and it has a secret compartment. I wish it did have a handle for a carabiner maybe, and that it was a little easier to unscrew the lid without accidentally unscrewing the infuser.  For price, perks, function and visual appeal I would for sure recommend this!

If you liked my reviews please share and check out some of my other reviews on the Melba’s Toasts & Roasts page!